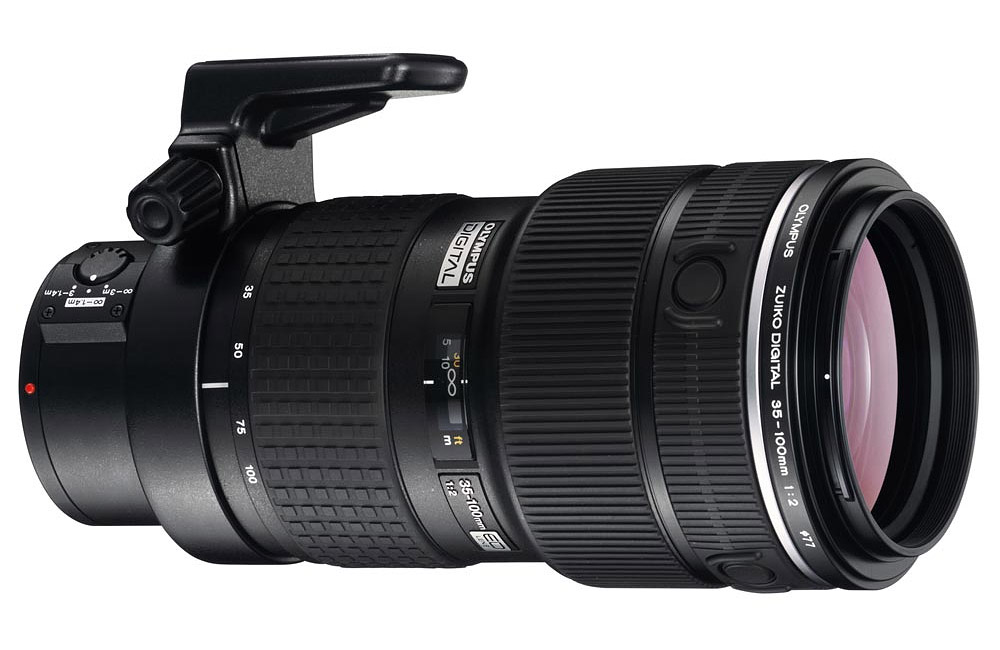 This large-aperture telephoto zoom lens (fixed F stop type), provides f/2.0 aperture through the entire zoom range. It is equivalent to 70-200mm on a 35mm camera, and covers from medium-telephoto range of natural angles to telephoto area with a compressed perspective effect. Its fast shutter-speeds and beautifully soft out-of-focus image behind the main subject are an ideal for portrait, theatrical and sports shooting under the low-light. Luxurious optical glass elements, such as, four ED lenses and one super ED lens are used to give the highest image quality with optimal resolution and contrast.

The resolution of the tested lens was based on the strength of RAW files from an Olympus E-3 camera. The files were developed using the dcraw program and the MTF50 values were measured by Imatest.

Let’s see how the lens performs in the frame centre.

Such graphs you would like to see more often. The results in the 35-65 mm range at maximum relative aperture are excellent. On stopping down the situation becomes even better. Really it would be difficult to find a system standard prime lens which would have noticeable better results than the ZD 35-100 mm by f/2.8-11. At the maximum focal length the lens fares a bit worse and the difference is the most pronounced at the maximum relative aperture. Even there, though, the value a tad above 38 lpmm guarantees images of at least good quality. On stopping down to f/2.8 the situation improves and the images become simply beyond reproach.

Now let’s have a look at the frame edge performance, presented on the graph below. Here again the situation is difficult to fault. The results are relatively even at all focal lengths (once again 100 mm is a bit worse than the 35-65 mm range) and fully useful up from the maximum relative aperture. On stopping down by 1 EV the image becomes simply splendid.

We have tested several 70-200 mm f/2.8 class lenses so far. This group includes both older Canons, Nikkors, Sigmas and a new Tamron. Undoubtedly the Olympus 35-100 mm fared the best of all when it comes to resolution. Because of that we are even more curious, how the new 70-200 mm f/2.8 lenses from Canon, Nikon or Sigma will fare. Their duel with Olympus promises to be very exciting.