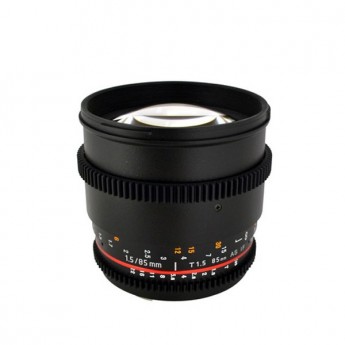 The Samyang 85mm T1.5 is a manual focus prime lens, this VDSLR (Video DSLR) version has been developed primarily for professional cine / movie making purposes. The VDSLR version feature follow focus gearing and decoupled aperture, which allow the user to smoothly and quietly change focus and aperture / depth of field whist filming, and link to professional follow focus cam systems. The Samyang 85mm T1.5 is a manual focus prime lens, designed to give exceptional results at wide apertures. At T1.5 great images can be obtained, which is perfect for portraiture and low light shooting, particularly when mounted on a full frame DSLRs. The Samyang VDSLR Cine lenses are rated in T-Stops rather than F-stops which is the standard for professional movie camera lenses. F-stop number expresses the speed of the lens on the assumption that lens transmits 100% of the incident light, and therefore is theoretical rather than a real world measurement. The T-number expresses the actual light transmission, and thus is accurate for exposure purposes. It is also worth noting that the Samyang lenses achieve excellent transmissions properties. The bokeh (the character of the out-of-focus blur) is a primary concern for professionals choosing an ultra large aperture lens for shallow depth-of-field photography. The Samyang 85mm T1.5 lens design offers excellent bokeh quality of out-of-focus highlights when used near wide open, perfect for film and cine applications. Independent tests and users confirm the Samyang's beautiful bokeh character, surpassing lenses 4 times the price. The lens optical construction is the same as the 85mm f1.4 lens comprising of 9 lenses divided into 7 optical groups with one aspheric lens element. The Samyang 85mm is designed with internal focusing (IF) meaning the lens does not increase in size when focusing. A further positive aspect to internal focusing is that the lens is much less likely to get dust inside, as opposed to external focusing (or zooming) lenses which can suck in dirt during use. The 8 bladed aperture design aids a great bokeh character at near wide open apertures. The Samyang 85mm T1.5 IF MC features Multi-coated lenses which aid the very high level of light transmission, and added resistance to flare and ghosting. It features a good sized manual focus ring and is perfectly adapted to most photographic applications (exclusive of sports or fast moving subjects) where manual focus is not an issue. Accurate for focus critical situations can be achieved through use of focusing in live view mode, available to most newer camera models. In practice users including professional photographers have found manual focus of the Samyang 85mm not to be an issue, even shooting at f1.4 with a very shallow depth of field in low light scenarios with static and slow moving subjects accurate focus can be achieved giving excellent results thought the image on full frame cameras. The focus ring features toothed rings compatible with professional geared follow focus systems available in the film industry and likewise a toothed, decoupled (de-clicked) aperture ring. Such modifications allow for smooth and precise control over focus and aperture during video recording / filming. This allows for ultimate manual control of focus and exposure when filming from one scene to another with different light source intensities, such as changing exposure values (EVs) from inside to outside, or even in-camera fade ins etc. The Samyang VDSLR versions can be used in still photography as well as for video purposes. There are increasing numbers of users using DSLRs for filming and High Definition (HD) video and manual lenses allows the user to change focus (focus pulling) and aperture during filming. The Samyang 85mm T1.5 lens should be a serious consideration to all professional or amateur photographers requiring a fast prime lens, regardless of budget. When the low cost of the lens is considered it should not be overlooked for amateur use, or as a primary or secondary lens for professionals wanting a dedicated, high performing T1.5 portrait lens.