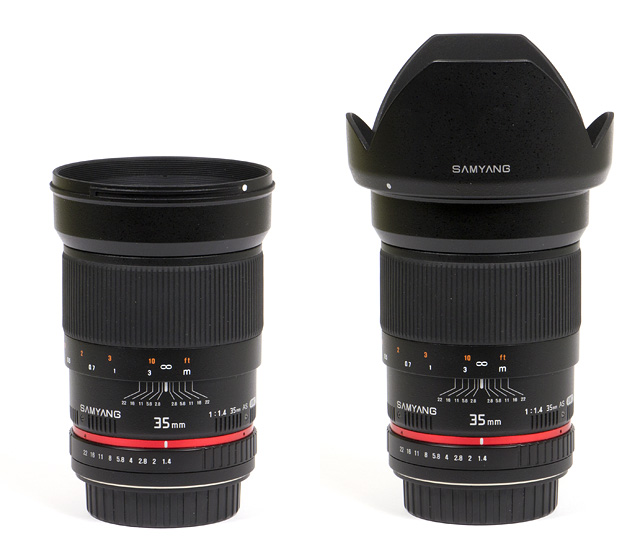 Announced last year, the Samyang 35mm f/1.4 ED AS UMC is a very fast moderate-wideangle lens for Canon, Nikon, Four-thirds, Pentax and Sony full-frame and APS-C DSLRs and Samsung NX compact system cameras. The Samyang 35mm f/1.4 is a manual focus lens constructed of 12 lenses arranged in 10 groups, with multi-layered and anti-reflexive UMC coatings to help prevent ghosting and flare.For such a fast wideangle prime, the Samyang 35mm f/1.4 ED AS UMC is predictably big and bulky, measuring 11cms in length and wighing in at 660g. While you can use it on a smaller APS-C body or even Samsung NX body, it won't balance very well - as demonstrated by the images above, it's a much better match for a professional-grade, full-frame camera like the 5D Mark III.Build quality is very good, despite Samyang being a relative newcomer to the lens market. The Samyang 35mm f/1.4 ED AS UMC feels very solid in your hand, even if the outer barrel and the filter thread appear to be made from plastic.

The focusing ring is generously wide and has a ridged, rubberised grip band. As this is a manual focus lens only, there's a distance scale that runs from the closest distance of 30cm to infinity, with a handy depth of field scale for f/2.8, f/5.6, f/11, f/16 and f/22. There's also a small white dot that appears to be an infrared focus index.

At the base of the lens is an aperture ring, adjustable in 1 stop (1 EV) intervals, which has a definite clicking action. An uncoupled (de-clicked) manual aperture version of the lens is available on special order if your main interest is shooting movies rather than stills.

In order to show you how sharp this lens is, we are providing 100% crops on the following page