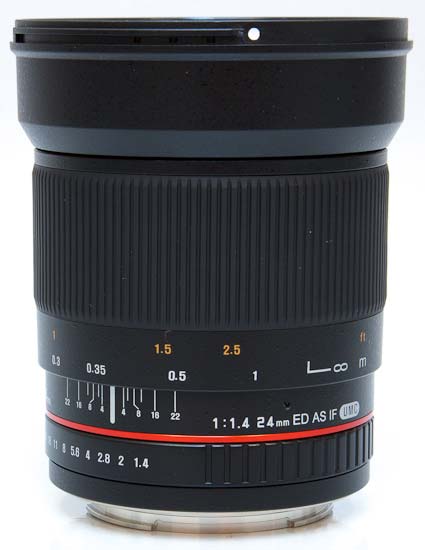 Announced earlier this year, the Samyang 24mm f/1.4 ED AS UMC is a very fast ultra-wideangle lens for Canon, Nikon, Four-thirds, Pentax and Sony full-frame and APS-C DSLRs and Samsung NX compact system cameras. The Samyang 24mm f/1.4 is a manual focus lens constructed of 13 lenses arranged in 12 groups, with multi-layered and anti-reflexive UMC coatings to help prevent ghosting and flare.For such a fast and ultra wideangle prime, the Samyang 24mm f/1.4 ED AS UMC is predictably big and bulky, measuring almost 10cms in length and wighing in at 680g. While you can use it on a smaller APS-C body or even Samsung NX body, it won't balance very well - as demonstrated by the images above, it's a much better match for a professional-grade, full-frame camera like the 5D Mark III.Build quality is very good, despite Samyang being a relative newcomer to the lens market. The Samyang 24mm f/1.4 ED AS UMC feels very solid in your hand, even if the outer barrel and the filter thread appear to be made from plastic.The focusing ring is generously wide and has a ridged, rubberised grip band. As this is a manual focus lens only, there's a distance scale that runs from the closest distance of 25cm to infinity, with a handy depth of field scale for f/4, f/8, f/16 and f/22. There's also a small white dot that appears to be an infrared focus index.At the base of the lens is an aperture ring, adjustable in 1 stop (1 EV) intervals, which has a definite clicking action. An uncoupled (de-clicked) manual aperture version of the lens is available on special order if your main interest is shooting movies rather than stills.

Flare is a typical problem with ultrawide lenses, so we were curious to find out how the Samyang 24mm f/1.4 ED AS UMC fared in this respect. As this example shows the multi-layered and anti-reflexive UMC coatings are effective in preventing veiling flare, but it cannot fully eliminate unwanted reflections when shooting against strong backlight.

With the lens wide open at f/1.4, you can see some very noticeable light fall-off in the corners. Stopping down helps, although to completely get rid of this phenomenon, you will need to use an f-stop of f/5.6 or smaller.

The Samyang 24mm f/1.4 ED AS UMC is not a macro lens. The close-focus point is at 25cm from the film/sensor plane. The following example illustrates how close you can get to the subject, in this case a CompactFlash card.