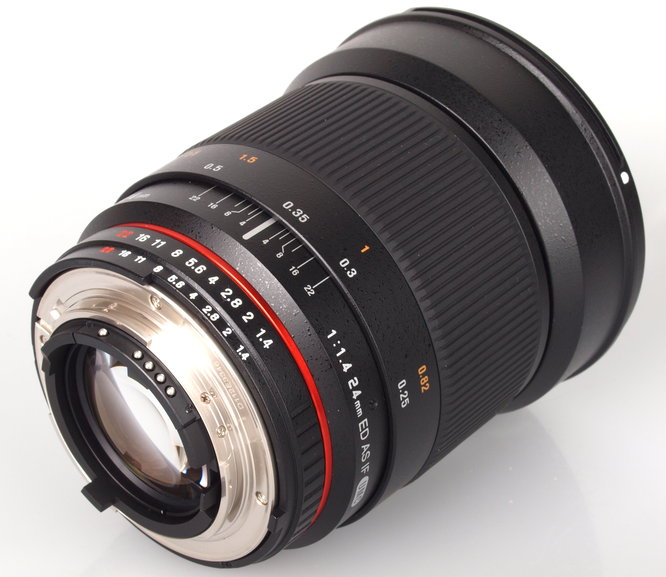 This lens is available to fit many different types of cameras, including Canon, Nikon, Pentax, Sony and Four Thirds SLRs as well as Samsung NX mirrorless cameras. Nikon users have a choice between the basic model, which has no electronic coupling and the AE model, that has electronic contacts for transferring exposure information to the camera. In this review we will be putting the AE Nikon version through its paces.

Samyang 24mm f/1.4 ED AS IF UMC Handling and features

Although £480 isn\'t a small amount of money for many, this price is still around a third of what manufacturers ask for their own 24mm f/1.4 lenses. Even though this is a budget lens, the build quality is very good. High quality plastics with a lightly textured finish have been used for much of the lens barrel, with a metallic red ring placed just after the aperture ring, denoting this is one of Samyang\'s premium lenses. The lens has a decent weight to it, but isn\'t overly heavy and it balances perfectly on the Nikon D700 used for testing.

The smooth manual focusing ring is a pleasure to use, with damping that is neither too stiff, not too light. Those who shoot video on a DSLR and tend to use manual focus anyway, may find this lens ideal due to its excellent manual focusing action and ability to isolate a subject through shallow depth of field. Closest focus is 25cm, which should be ideal for shooting in cramped environments or even for the occasional close up, where the wide angle will allow more of your subject\'s surroundings to be included than lenses with longer focal lengths. 77mm filters can be used with this lens and as focusing is performed internally, the lens doesn\'t change length, and the filter thread does not rotate, which makes it ideal for use with graduated and polarising filters.

A metering chip with electronic contacts is included on the version tested, so matrix metering is supported on all Nikon cameras. The lens has to be set at f/22 to operate normally on modern Nikon cameras, but no lock is provided to hold the aperture in this position. No such issues should be encountered with the basic version, as no metering information is transferred to the camera.

A useful and clear hyperfocal distance scale is included, but there is no hard stop included for infinity focus, probably due to the use of low dispersion glass in the optical design. A lightweight plastic hood is provided with the lens, which fits snugly on the provided bayonet fitting. Unfortunately the rotation of the bayonet fitting is in the same direction as the lens needs to be turned to remove it from Nikon cameras, which often results in the hood coming loose when changing lenses.

At f/1.4, this lens will not win any awards for sharpness, but the fairly good centre sharpness should be just decent enough for small sizes on the web, or even video work. Stopping the aperture down improves sharpness dramatically, with good sharpness being achieved in the centre by f/2 and excellent centre clarity at f/2.8. Sharpness towards the edges of the frame lags behind somewhat, only reaching good levels at f/2.8, but still improves as the lens is stopped down. Peak sharpness across the frame is achieved between f/5.6 ad f/8, where the clarity produced approaches outstanding levels across the frame.

Chromatic aberrations are kept under control, remaining under half a pixel width in size at all but the fastest and slowest apertures. These low levels of fringing should pose few issues in the field.

Falloff of illumination towards the corners is very strong. The corners are three stops darker than the image centre at f/1.4 and visually uniform illumination isn\'t achieved until the aperture is stopped down to f/8 or beyond.

Imatest detected 2.03% barrel distortion, which is a relatively mild amount for a wide aperture lens like this, but may still become visible in images with straight lines close to the edges. The distortion pattern is uniform across the frame, so should be relatively straightforward to correct in image editing software afterwards.

The multi coatings applied to this lens seem quite effective, suppressing flare and keeping contrast levels reasonable. Strong point sources of light shining into the lens will cause a loss of contrast and plenty of ghosting, but only in extreme examples of this kind of lighting.